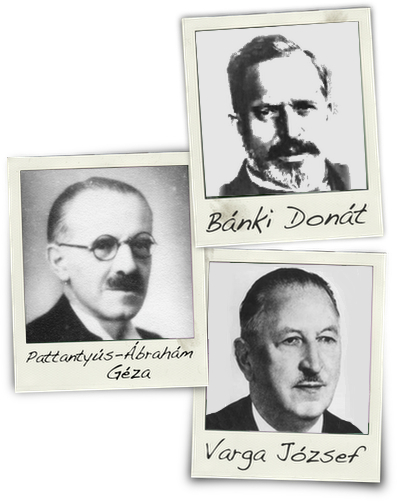 The Department was founded by Donát Bánki in 1899, with name of Department of Hydraulic and Hydro Machines. Its first professor was Donát Bánki whose name became famous with the theoretical development of his own turbine. The excellent erector, inventor (He developed the carburator, motors ...etc. ) Bánki died in 1922.

The following professor in the Head's chair of the Deapartment was Ábrahám Géza Pattantyús , who came to here in 1930. He was the best known engineer educator in the higher technical education in the Hungarian Education's History. Until his death in 1956 he wrote a number of books enriching the hungarian technical literature. In addition he escalated the Department's scientific research profile with the pneumatic conveying and two phase flows.

The name of the Department changed to Dept. of Hydromachines in 1952. Leaded by József Varga cavitation researches became intensive in the 50's and 60's. Professor Olivér Fűzy established developing the modern numerical models of the fluid machines and equipments, professor László Pápai followed the investigation of pneumatic conveying. Nowdays this research topic is supervised by Professor Emeritus László Kovács.

Between 1992 and 2000 the Head of the Dept. was László Kullmann. Zoltán Vajna ordinary member of the Hungarian Academy of Science- became professor of the Department with the Dean's assignment in 1994. The Department of Hydrodynamic Systems celebrated its centenary in 1999. From the July of 2000 professor Gábor Halász leads the Department. Its new name is Department of Hydrodynamic Systems from December of 2003. From June in 2007 for one year the Depatment was lead by László Kullmann. From June 2008 the head of the department is György Paál.